pur·sui·vant, n.  [ME. pursevante; OFr. poursuivant, ppr. Of poursuivre  <  poursuir; see PURSUE]  1.  in the British College of Heralds, an officer ranking below a herald.  2.  a follower, attendant.

“My tongue will tell the anger of my heart,/Or else my heart concealing it will break,/And rather than it shall, I will be free/ Even to the uttermost, as I please, in words.” –Katharina, The Taming of the Shrew

I just saw a production of Kiss Me, Kate, the musical based on Shakespeare’s The Taming of the Shrew. With music and lyrics by Cole Porter, the musical takes us through a play-within-a-play plot. We witness the backstage drama of a director and his ex-wife actress reuniting to play the lead roles of Petruchio and Katherine in Shakespeare’s play.

Seeing the show was my recommendation. My parents wanted to celebrate my birthday belatedly and given my strong affinities for musicals as a teenager and the residue of this obsession, going to the play sounded like a good way to spend an afternoon.

As the musical unfurled, there were clear messages about who we were supposed to be on the side of: Petruchio, the man trying to tame the willful woman, and who was supposed to be the butt of the joke: Kate. At its best, the play was oblivious to its messaging: oh, isn’t so darling how she is fighting back so strongly—silly woman. At its worst, a scene feels dangerously close to rape: Petruchio, throws Kate, who has just sung about how she will never kiss him, over his shoulder and victoriously walks away with her to their bridal suite to end Act I. 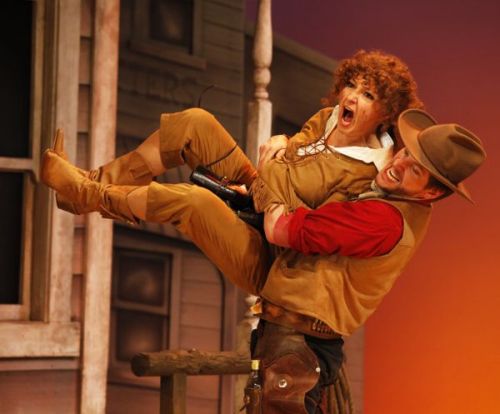 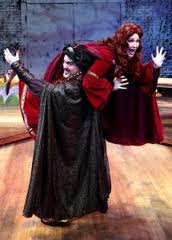 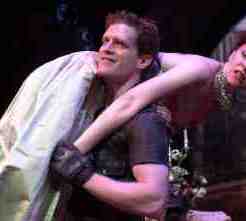 In another scene, the director is displeased with his actress ex-wife acting out her real anger at him through her character and so, in front of the audience, he throws her on a table and begins spanking her. Her sore bottom becomes a running joke for the rest of the play. 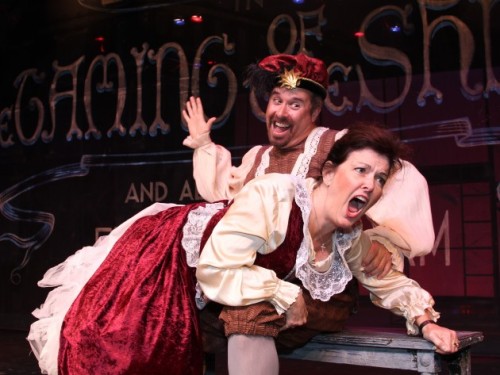 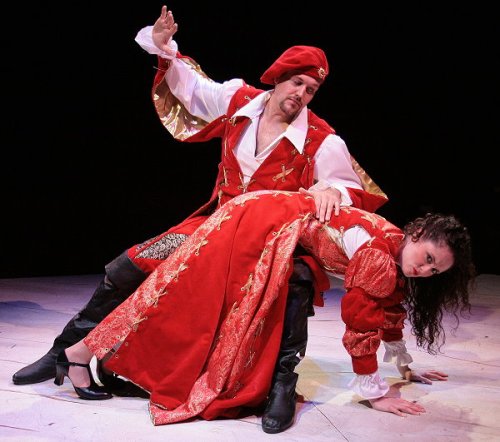 Some might say that I’m overreacting, that I’m reading into a play written over sixty years ago with a present day consciousness. And that’s true. But the fact is that the play is being produced and performed now, in our time, and as such it has strong ramifications. The art and music and theater that we engage with influences us and influences what we deem as acceptable behavior.

In an essay by Sam Hamill entitled “The Necessity to Speak,” Hamill attempts to link categories of oppression together and talks about the need to acknowledge these oppressions for what they are. He talks about the different forms violence takes, demonstrated in sexism, racism, classism, and war. One of the central focuses of his essay is the stories of women he has worked with who have been victims of domestic violence. He links the abuse of these women to the way we are taught to think of women in our culture. He writes about how James Cagney would smash a grapefruit into a woman’s face and everyone would laugh because “Nobody likes an uppity woman.” Nobody likes a woman who doesn’t know her place.

A play like this one—where the strong-willed woman needs to be tamed; where her refusal to be married is completely ignored; where her voice and her actions, no matter how loud or demonstrative, do not matter; where she is powerless because her desires are given no respect by those around her—is deeply problematic. Ultimately, this is a play in which a woman’s fiery spirit is the punchline, and her lack of volition, the happy ending

I spent the first act seething in my seat. At intermission, when I checked the playbill for what was to come, I saw that the penultimate song in the musical is entitled “I Am Ashamed That Women Are So Simple.” I pointed this out to my parents. My dad assumed the best, that the song would be tongue in cheek, a sort of meta-commentary on the sexism displayed in the play. No such luck.

In “I Am Ashamed That Women Are So Simple,” Kate decries her former choices and thus the former iteration of herself. It turns out that she was trying to make herself and her life complicated when really she, like all women, is simple. She sings, “I am ashamed that women are so simple/To offer war where they should kneel for peace,/Or seek for rule, supremacy, and sway/When they are bound to serve, love, and obey.” At the end of the song, Kate kneels before her soon-to-be husband and bows her head in a position of complete submission.

And then, with a reprise of the song “Kiss Me, Kate” (SPOILER ALERT: She kisses him), the curtain falls, with all the gender roles safely intact.

Does it sound like I’m angry? Well, that’s because I also take the play personally. I am a Kate.

I spent my adolescence trying to navigate my sense of self in relation to others, particularly boys, because I grew up in the South, where there are still very clearly defined gender roles. When I read Mary Pipher’s book Reviving Ophelia in my early twenties, I began to understand the dichotomy of who I was supposed to be. In the book, Pipher examines the struggles of teenage girls who are having identity crises. They were told as young girls to work hard, to dream big, to share their ideas with others. As they grew, they were also taught to small themselves, to not make waves, to make themselves attractive to boys by being less intelligent and more conciliatory.

Towards the beginning of the play, in one of the first moments when Kate speaks for herself, she sings a song entitled “I Hate Men.” It’s so interesting to me, the whole idea of this song. Because it seems the only way writers felt they could explain why a woman like Kate wouldn’t want to marry or why she wants some volition in her life must be because she hates men. Could it be that—at Shakespeare’s time, at Cole Porter’s time, even now—she doesn’t have access to the same opportunity or the same respect as men? Or that in many place,  by the act of marrying, she becomes less than a whole person, a servant, a kind of property? I guess that’s not catchy or concise as a song title.

Men aren’t getting any favors from their depiction in the play either. Petruchio, the man who has agreed to tame Kate, comes off as a pompous player. After he has locked Kate in her bridal chamber, he sings “Where is the Life That Late I Led?”, a song detailing all the romantic dalliances he had before, the ones he gave up to be with this shrew of a woman. He names each woman and what she meant to him. There was a Lisa, actually. She “gave a new meaning to the Leaning Tower of Pisa.” How charming.

I believe so strongly in the power of discourse. A struggle I encounter when I start to talk about issues of inequality or misogyny is that oftentimes people aren’t interested in a discussion. But aren’t these the kind of discussions worth having? Aren’t they the ones that could change futures and save lives? I would have appreciated the opportunity for a dialogue after the play. Maybe I could see the play in a new way or maybe I would have had the opportunity to witness my own concerns voiced in a different way.

I have been thinking about the power of language lately. And how, at certain points in my life, certain words and stories and songs have literally saved me. When I feel compelled to write, oftentimes it is because I have butted up against some idea or concept or perspective that I am wrestling with. Writing is a way for me to work through it and to offer a different way of seeing something.

In the closing scene, Kate sings: “So, wife, hold your temper and meekly put/ Your hand ‘neath the sole of your husband’s foot/ In token of which duty, if he please/ My hand is ready/ Ready/ May it do him ease.”

And here, the dutiful woman is again restored to her position of servitude, a pursuivant to her husband’s needs. The fact that this play can be performed now without a hint of hesitation, without women in the play or women in the audience voicing discomfort, outrage, or dissonance reveals much about the society we live in. It is a society in which many religions still require the word “obey” for women as part of marriage vows. And where a woman can be sentenced twenty years for firing a warning shot when her ex-husband threatened to kill her and her child. It is a society where young men rape a young woman and brag about it on social media. Where, when given sentences for their crime, these young men are spoken of as young men of promise, put away before their time. It is a society in which to even write this and acknowledge these things, to express my perspective, is to risk me being called oversensitive, man-hating, or a bitch. But you know what? These things need attention brought to them. Because this play and pieces of art way more demonstrably misogynistic are constantly being produced without a sense of awareness about the aspects of them that are detrimental to all people, all genders.

As I was watching the play, feeling myself immersed in reactivity, I knew that when I left the theater, I could write about it. Each of us needs to complete the picture that these kind of experiences and shows leave out. We need to vocalize why we have a knot in the pit of our stomach or fire in our veins so that others can understand. Maybe then, we have an opportunity to learn from our mistakes and treat everyone with dignity and respect, honoring every single person as a whole human being.