saint (sant), n. [ME.; OFr. seint, saint; L. sanctus, holy, consecreated],  1. a holy person. 2. a person who is exceptionally meek, charitable, patient, etc.  3. [S-], a member of any of certain religious groups calling themselves Saints. 4. in certain churches, a person officially recognized as having lived an exceptionally holy life, and thus as being in heaven and capable of interceding for sinners; canonized person.    adj. holy; sacred; blessed  v.t. to canonize; make a saint of. Abbreviated St., S., s. 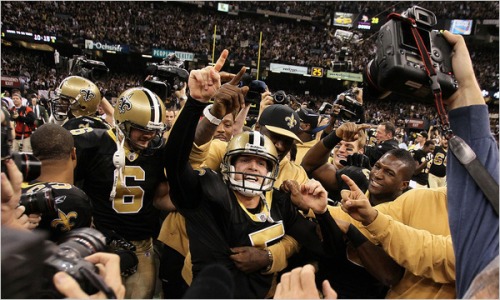 This is a special post, not one that follows the normal rules of this blog. I felt I had to weigh in on the New Orleans’ Saints victory over the Minnesota Vikings today to win the N.F.C. Championship just a few hours ago.

I am not a big football fan. I enjoy watching the game but only in the company of others. As a New Orleans native, I became quite used to the Saints losing year after year. When others were watching, I would watch too and cheer and ultimately, be disappointed. Over the past few months, I have watched the Saints both win and lose, but I have watched them play with diligence and commitment and a spirit of camaraderie. I have also watched my friends and strangers from my hometown become overcome with excitement at having a winning team, at having something from our city to believe in.I have seen the Superdome full, the fans decking themselves out in elaborate black and gold gear. I have seen post after post on facebook, friends echoing their enthusiasm about the team winning.

New Orleans isn’t always united. The town had its share of problems even before the levees broke–a failing education system, deep scars and open wounds of racism, corrupt politicians, disintegrating wetlands that make the city even more unstable. But the thing is, the city is also a place of deep spirit, of commitment, of passion that cannot be squelched, of celebration that will not be denied. And we have seen that in the way its citizens–and many people from around the country–have rallied around the Saints this year.

The truth is: We needed this. It has been a long long road since Katrina. We watched our city, our neighborhoods, our blocks and our homes covered with water. This was about more than a football team. This was about more than a championship game. Today was about feeling proud of our city and ourselves. I’m not saying that winning this championship game or even winning the Superbowl, if that’s what comes to pass, solves the city’s problems. There is still so much to rebuild. There is a deep disparity of wealth. There are problems that will not be erased without much work and dedication. But when I watched the Saints win today, I kept thinking of the song “Do You Know What It Means To Miss New Orleans?” I thought of it in terms of this game. I don’t think that everyone knows what it means to see a team that has never, in its 43 year history, made it to the Superbowl  realize that dream. I don’t think everyone knows what it means to see the Superdome–a place ridden with memories of despair from when it was a shelter for Hurricane victims–turn into a place of redemption and hope.

Perhaps some might say that I am blowing this out of proportion, that this is afterall just a sports game, that it is made up of overpaid players and by people who want to make a ton of profits. All I can say in rebuttal is how it felt today to see the Saints win. I, a person who doesn’t really care about sports, was overcome with a spirit of joy as I watched fans in the dome hug each other and confetti fall from the ceiling. I was unable to get through to my parents on the phone for an hour because the 504 lines were all tied up, everyone was calling each other to scream into the phone, to cry, to celebrate.

I will argue with anyone who says this was just a game. Today provided the citizens of New Orleans with fulfillment of a long awaited dream and with a chance to showcase our city and be proud of one another. No matter what our differences, today we all have a team we can believe in, and for the moment, that feels like enough.