red (red), n. [ME, rede, redde; AS, read; akin to G. rot, rufus, red, rubere, to be red, etc. (cf. RUBRIC, RUBY, RUBCUND, ROUGE, etc.)] 1. a primary color, or any of a spread of colors at the lower end of the visible spectrum, varying in hue from that of blood to pale rose or pink: see color. 2. a pigment producing this color. 3. [often R-], [sense a & b from the red flag symbolizing revolutionary socialism], a) a political radical or revolutionary; especially, a communist. b) a citizen of the Soviet Union. c) pl. North American Indians. 4. a red object, as a red space on the board or wheel used in various games of chance, a red chessman, or a red piece in checkers. adj. [REDDER (er), REDDEST (-ist)], 1. having or being of the color red or any of its hues. 2. Having red hair. 3. Having or considered to have, a reddish or coppery skin, as the North American Indians. 4. [often R-], a) politically radical or revolutionary; especially communist. b) of the Soviet Union.

paint the town red, [Slang], to have a noisy good time, as by visiting bars, night clubs, etc.

For this week, I asked some writer friends if they would like to contribute a paragraph about red, whatever that meant to them. My friend Debbie submitted hers.

Red is the succulent calyx of hibiscus, the paper-like petals of a poppy flower, the embarrassing and always surprising dog penis. Red is the fire truck nail polish I’ve never had the guts to wear. It is the color of my grandmother’s lipstick, given to me in a ziplock after she died. Red, in several different shades, were the turtlenecks my mother bought me when I went into 7th grade. Red was my face, standing in front of the dressing room mirror at JC Penny, terrified of my reflection, ashamed to take up too much space–as though the red of my shirt was screaming. “You look good in red,” I remember my mom saying, leaning against the doorway, “Red is definitely your color.”—Debbie Weingarten

Red is the color of embers. The hot burning coals at the bottom of a fire tinge with red. It is the color of anger and of inspiration. Bored with my desk a year ago, I covered its bright white with a deep tomato red. Red and green color blindness is the most common kind. No sunsets. No grass. Red ribbons have become synonymous with the fight against AIDs. Red roses represent love. Red is one of my mother’s favorite color and she looks striking in it, her stark white hair and a red blouse. Red is the color of the blood coursing through my veins. Red is the color that shades my insides when I am frustrated. I remember feeling shy about wearing red when I was younger because I learned somewhere along the way that red was the color prostitutes preferred. Red lips. Red slips. The Red Light District. Red is a shock of a color. Red was the color of the dress I wore to my friend’s ball. I was sixteen and the gown was long and satin with flowers on it. I used my mom’s red lipstick and I felt beautiful. A search for red leads to Red, a digital camera company; Joinred, the fight for Aids awareness; Red Bull energy drink; The American Red Cross; The wikipedia entry for “red.” I remember the joke from when I was little, “What is black and white and red all over? A newspaper.” It took me a long time to get that joke, so embedded in my mind was the visual of “red” that I didn’t even consider “read.” – Lisa O’Neill 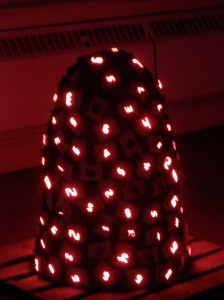 the word of the week.

more soon, but for now: