We are delighted to share with you the dictionary project’s interview with author Elizabeth Frankie Rollins, whose stunning debut collection of short stories The Sin Eater and Other Stories is released this Saturday. A new plague falls on houses, a boy and his dog appear and disappear and reappear, sins are consumed, relished, and released, whole villages made of sand are carved and destroyed, a boy runs and keeps on running, people try to be who they are not and then failing that, try to be who they are. Enjoy these words from Rollins, on life and writing, which, for her, are really one and the same. 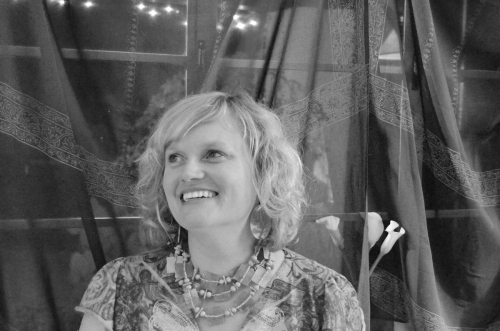 In my early thirties, I bought a dictionary and a thesaurus for my writing desk, each one big and red.  I told a writer friend of mine that I’d done this and he said, “Uh oh.”  I asked him why he said that but he shrugged and looked out the window.  I changed the subject, mystified.

It used to bother me, that “Uh Oh.” I could hear it every time I reached for one of these big red books.  I mean, what could be wrong with wanting to use better, more accurate language?  I’ve pondered it for years. Still, I have no idea what he could have possibly meant.

3. What is the most obnoxious/insidious/annoying word?

It’s not a word; it’s a phrase.  I loathe the phrase “been there, done that.”  Luckily, it is falling out of use.  It’s such a cruel thing to say.  It speaks of all that is limited and small and unwilling.  What it means to say is that the speaker does not care about you and your story or what you might be saying-it’s an essentially narcissistic, deaf phrase.  It stabs me in the ears.

Brimming.  Early on in my writing, while I was working on the story where I first understood the writer that I am, I kept seeing a chalice brimming with red wine.  Neither the chalice nor the wine had anything to do with the story.  It was merely an image that told me how perfectly I must fill the story with the sorrow that was at its core. To have it so full.  To have it just so full, almost too much, but not too much.  To have it also be beautiful.

5. When I think of your writing, particularly in The Sin Eater and Other Stories, the word I think of is precision. Not precision in its hard, calculating sense but in terms of its exactitude, its accuracy, its care. I think of what Kung-fu Tze said: that “all wisdom is rooted in learning to call things by the right name.” I wonder if you could speak to your process of wording, of naming.

In my early writings, I wasn’t precise.  I used to build fat rooms of velvety, lyrical prose.  I’d invite people in and they would smoke hashish and drink honey wine and roll around.  One day, though, someone sat up and said, “Wait, this is lovely, but what the hell does it mean?”  And all my texts crumbled.

In terms of process, now, it still doesn’t begin in precision.  I pound the thing out of the world with the bluntest, dullest tools. I am also partially blind and deaf at this phase.  I follow a single strand of golden idea that I have either seen or perhaps only dreamt of seeing.  I crash around the cave walls, moaning and hacking at what I bump into.  I hope, stupidly and optimistically, that something will be there.  This can take days or years, depending on the project.  Eventually, there’s some light.

I make many, many, many drafts.  Each one increases my sight and understanding.  I’ve learned to point myself, and the reader, in.  I mercilessly surgeon the thing as time goes on.  Lines I once loved I snip away and don’t save.  I carve away bone.  I trim.  I rig up to electricity.  I go from Stone Age to modernity every time.

6. Is there a word for which you would like to rewrite the definition? What word? What does it really mean?

Bin. My husband has long become used to the fact that I call any vessel that holds other things a “bin.”  Socks are bins.  Cups are bins.  Purses are bins.  Paper bags are bins.  A cupped hand can be a bin.  As in, “Hand me that bin, will ya?”

This is the level to which I have vowed to take the risks of living fully.

Any friend of mine will tell you that I want to know what you ate.  I want to know what you had for lunch or dinner.  And I usually remember it.  I ponder it for days.  Why does X eat that?  Why doesn’t Y like that?  I wonder how to cook some of these things.  I store information for future trips to restaurants or grocery stores.  In 2001, a teenager I knew got the house Lo Mein with beef, chicken and shrimp at Oriental Pearl for lunch.  If she didn’t get that, she got the egg salad sandwich at the Bread Board. A phone call to my sister the other night revealed the news that she’d had an antipasto salad and then, cannoli.   I had a boyfriend who loved pepsi and fried fish.  I have a friend who can’t eat any white food.  I have a new friend, who, I’m told, will always order meatballs if they are on any menu.  A friend in NYC has posted several pictures of various plates of sausages and pickles, which she labels: tv snacks.  Another friend ate so many lentils in his crappy flat in Scotland 20 years ago that he still hates them.  My brother-in-law hates stinky cheese.  A friend loves pickled herring.  My nephew loves berries.  It is character.  This is all character study. I study humanity this way, by what it eats with flatware.

My writing is always concerned with rebirth. Possibility.  It is the most interesting thing about being human.

I love the idea that whenever we tell apocalypse stories, it is about what happens after the apocalypse.  It’s about the ratoon that appears. The possibility of redemption is the most interesting thing in the world.

I’m not interested in the limitations of gender.  I’m interested in the possibilities of thinking beyond gender, beyond culture, beyond years, beyond geography. I’m interested in where the real “us” lives.  The us-ness of all humans.  This is why my writing has turned to history. It’s important to me to find what is the same about characters in 1750 and the people I spend my days with.   If I had a spiritual task, it would be to be able to write this truth finally, completely, clearly.

I love the shapes of living.  I love the shape of narrative as it plays out in a life.  How a random move, a trip, a lover, a choice will shape the rest of a person’s life.  My characters teach me this, if I didn’t know it from watching my family and friends.

So many people want an obvious, fill-able, prescribed shape to live into, but there isn’t one.

In fact, it is the truth that there isn’t one shape, that an infinity of life/story shapes exist, that makes me want to go on living.

Elizabeth Frankie Rollins’ debut collection of fiction, The Sin Eater & Other Stories, was released February 2013. Rollins has received a New Jersey Prose Fellowship and a Pushcart Prize Special Mention. She authored the chapbook, The Sin Eater, the novels, Origin, and Doctor Porchiat’s Dream, and has published work nationally in Conjunctions, Drunken Boat, Green Mountains Review, and The New England Review, among others. She lives and teaches writing in Tucson.  She brings the sin eater and other redemptive possibilities for modern maladies wherever she goes.