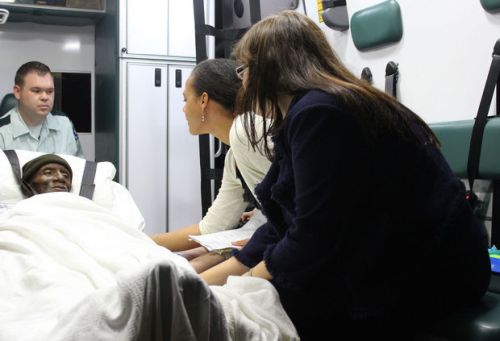 I wrote about Wallace last month. He is a man who spent forty-one years in solitary confinement after being convicted of the murder of a prison guard. He and fellow inmate Alfred Woodfox, the other man convicted, have maintained their innocence these four decades. They were originally convicted for armed robbery in 1971. When they entered Angola State Penitentiary in Louisiana, the two started a Black Panther chapter in order to work for equity for black inmates and to encourage reform of a prison that allowed, and seemed to encourage, brutal violence and rape. The men believe starting the chapter led to their conviction. According to Wallace’s counsel, there was a bloodied fingerprint found at the crime scene that belonged to neither man. The prison guard’s widow does not believe the two men are guilty.

Wallace was freed on Tuesday. Even that was a battle. Petitions began for his release back in June, when he was diagnosed with terminal liver cancer. On Tuesday, Federal Judge Brian A. Jackson of the Middle District Court of Louisiana overturned his conviction, saying Wallace’s jury was “improperly chosen in violation of the Fourteenth Amendment guarantee of ‘equal protection of the laws.’” Women had been excluded from the grand jury. Still, the state tried to keep him, quickly appealing the ruling. Judge Jackson again ordered his release, saying a failure to release would “result in a judgment of contempt.” An ambulance took him from Angola straight to a hospital in New Orleans, where supporters gathered to welcome him home. He died in his sleep at a friend’s home this morning.

Jackie Sumell, the artist and friend Wallace collaborated with on Herman’s House, said, “If he dies a free man, we have won.” And I believe this to be true, but I also know that nothing can be done to reconcile those forty years in a six by nine cell. Nothing can be done to reconcile a life that could have been so much more, a life that we, all of us, set limitations on by virtue of our flawed system. Nothing can be done to reconcile the thousands of others who have spent years in solitary, their lives forgotten because they were and are hidden from view. What makes Herman’s case stand out is that a larger audience knows about him because of people on the outside. Wallace, Woodfox, and Robert King (convicted of a separate crime and held in solitary for twenty-nine years), were dubbed the Angola Three after a young law student discovered their case in 1997 and realized the men were still in solitary after more than two decades. The artist Jackie Sumell, upon learning of Herman’s case in 2002, started a correspondence with Wallace which led to a collaborative art project which led to a documentary film. But what about all the other Hermans?

One tragic aspect of the way we punish people in this country is how we tuck them out of sight. We act as if because they have broken a law, their lives no longer matter. The most tragic part, though, is that we are either unable or unwilling to see that, in different circumstances, they could easily be us. We are all capable of rage, of violence, of error. We are all trying to get by in a world that is full of suffering, but we do not all have the same footing, the same privileges, or the same opportunities. Nelson Mandela said, “When a man is denied the right to live the life he believes in, he has no choice but to become an outlaw.”

Our unwillingness to view prisoners as people creates a safe cave for us. A cave where we can blame others for all the world’s ills, a cave where we can protect ourselves and our families from those that would harm us, a cave where we can live our lives without fear, a cave where we can deny our own failures and violences. But the cave isn’t really protecting us. It is another kind of cage. The cave cages us because deep down we know that stories we tell to protect ourselves have holes. We know that each of us has the capacity for great brightness and the capacity for dark. If we could acknowledge our own shadow selves, maybe then we could really open to those around us. Maybe then, we could create a system that sees the gray area between black and white. Maybe then, we can approach one another from a place of compassion.

Many people have said that the way we treat others predicts who they will become. Researcher and storyteller Brene Brown has said, “Shame corrodes the very part of us that believes we are capable of change.”

We need to reform our criminal justice system in this country. We need it for the people who have been wrongly convicted. We need it for the ones who have committed crimes. We need it for those of us who have never been sitting there waiting for a judge or jury to decide on our fate. Fyodor Dostoevsky said, “The degree of civilization in a society can be judged by entering its prisons.” We have choice about the kind of society we want to be.

Filed under other words

One response to “cap·tive: part two”