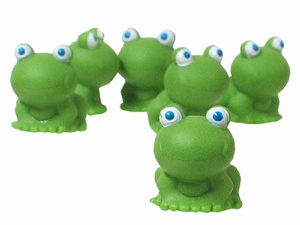 From Kindergarten until I left my small, rural school in Georgia as a Junior, the same man took my yearbook photograph every year.  He had a stuffed frog named, appropriately, “Mr. Froggy.”  For all the kids who didn’t want to smile, Mr. Froggy hopped out of his frog cave to be animated by a wide-faced, mustached Mr. Photographer.

I didn’t want to smile.  At least in the way he wanted me to smile.  To him, smiling meant teeth, and I really didn’t want teeth in my pictures.  When it came my turn, I would give a slight, tight-lipped smile, and out would come Mr. Froggy.  The photographer would switch on his goofy frog voice––personable, perhaps child-friendly on the surface, but beneath it there was this impatience, this sense that I was the one cattle who wouldn’t listen to his herding call.  Finally, he would take the picture anyway, teeth or no teeth.  I think over my school career I alternated between the tooth and non-tooth yearbook photos, depending on how annoyed I was with the frog voice that year.

This scenario has continued to happen throughout my life––why the long face?  Cheer up.  Give me a little smile.

Just because I don’t walk around with a continual, pep-rally grin on my face does not mean that I’m sad.  In fact, I’m content 80% of the time.  Well, maybe 70%.

But why are people, even strangers, so concerned about it anyway?  Maybe that’s what the song “It’s My Party and I’ll Cry if I Want To” is really about:  the freedom to come off as sad or as happy as one damn well pleases.  Maybe a happy demeanor became expected with the rise of consumerism, salesmanship, and retail; the expectation that if one looks happy enough, talks friendly enough, stands upright enough, that the customer will feel happy and perfect, too.

One day, I was driving back home with a friend, and she asked me about the word “content.”  I had always had a positive relationship with the word “content.”  But my friend said, “Content means that things are routine, normal, and satisfactory.  Happiness is so much more than that.”

So, maybe people just aren’t content with being content anymore.  The world can never be too Technicolor.  A world flash-flooded with routine yet vibrant compliments.  A world where Mr. Froggy hops out at unsuspecting, content strangers, convincing them that no matter how wide their smiles may be, they’ll never be wide enough.


*Drew Krewer’s work has appeared in Trickhouse, Poor Claudia, Pequod, and Quick Fiction.  Ars Warholica, a chapbook of poetry, was recently published by Spork Press.  He holds an M.F.A. from University of Arizona, where he received the Academy of American Poets prize.  He runs the multimedia culture site mars poetica.

Tagged as Drew Krewer, hating being told to smile, it's my party and I'll cry if I want to, kindergarten, Mr. Froggy, school pictures, smile