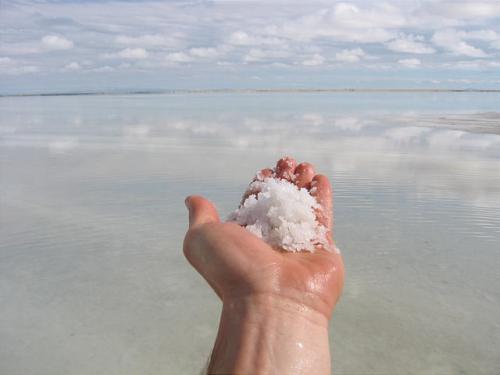 Today, we have a guest post from writer and friend of the project, Julie Lauterbach-Colby*:

A space opens to provide context—topographic lines separating what runs away (what I have run from). Almost as soon as we crossed the Californian border into Nevada we start to see the dried salt flats. What used to be lakes, appear as opening voids on the altas. Points, here. An exact location rendered gone. Those first explorers into the open lands: the badlands, wastelands. Where the earth has dried and cracked, opened up from sudden change, sudden pressure (the constant ebb of flow of life, of family units), chasms of depth and darkness. How deep is each cut (of the earth)? Around the outer rims, white powder still visible. Traces of. Portraits of. The past. Water marks: where seawater dug its way gently into the sides of the land. With each receding, circular line: a closing in upon itself. Earth’s vacuum effect. From a bird’s eye view, cartographers map each concentric shape wider, farther apart from the last. On a map, what we have is an inverse mountain, a valley that appears to create a wide vortex but which, from the ground, appears nothing but flat for miles and miles and miles.

The cake, too: flat and even when I peek into the oven to check its progress. Sudden change, sudden pressure: my mother, a lesson. Set on the counter to cool, the soft center closes in upon itself. Baking soda, saleratus powder, likes heat and time to converge with the flour. What I have is (What appears from my bird’s eye view.) cartographic crater.

My family, driving the winding Californian coast each summer, past Carmel and Monterey out to the coast where we dug for abandoned shells and overturned abalone. On the edge, where saltwater plunges itself into porous rock, what remains? Collected in shallow pools, sun-evaporated during low tide, this white powder. Remains of after collected on the tip of one’s finger.

Ground up and put next to each other, sodium chloride (sea salt) and sodium bicarbonate (baking soda) look almost identical. (As in the saying, Like mother, like daughter.) But we must think back to the tracing of one’s concentric circles: each enclosed within the other (Do we interpret those inner rungs, those that, on a map, appear to be digging themselves into a hole?) but standing on the edge one sees that no: what we have is (       ).

*Julie Lauterbach-Colby is a writer, teacher and artist living in Tucson. She is currently working on a project that incorporates cartography, mathematical equations and cadavers, and owns her own editing business called Chicken Scratch Editing.